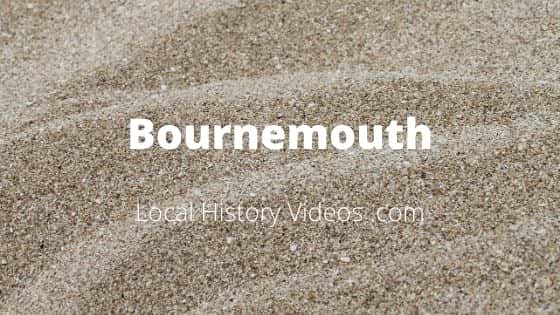 Just over a hundred years ago, the large seaside resort of Bournemouth in Dorset was a tiny seaside community in Hampshire. Since then it has seen a population boom, an expansion of its boundaries, war defences on its beaches and then the 1974 transfer to a different county.

Here’s a selection of films which show the town through the 20th century.

Bournemouth In The 1930s

In the 1930s Bournemouth was in the English county of Hampshire, and had recently experienced a massive boom in population from just 600 residents to a community of 130,000 people.

We see the Mayor, Percy May Bright,walking in procession with a number of dignitaries before ceremonially cutting the boundary tape. Then he lays a ceremonial stone marking the extension of the town’s boundary.

This British Pathé 1939 travelogue item about the South coast holiday resort is part of an issue titled “HOW’S THAT?”.

Various shots compare old photographs of Bournemouth’s beach, cliffs and town in the 1870s, when there were only 600 local residents, to the same views in 1939 when Bournemouth was home to a 130,000 people.

Also seen are tourists relaxing on the promenade, people paddling in sea, and the public gardens, including the Bourne Stream. A performance of the Bournemouth Municipal Orchestra closes the film.

War time defences on Bournemouth Beach were filmed by British Pathé in 1944. Anti-tank defences and barbed wire dominate the seafront, although people are still enjoying time on the beach thanks to Garrison Commander’s order of 25th July 1944 allowing access. People contentedly relax in deckchairs while families laugh as they play in the sand.

Bournemouth In The 1950s

David Lowe uploaded footage of a 1957 family holiday to Bournemouth onto YouTube. Although it’s mostly shots of the family, other people and the background.

Bournemouth In The 1960s

Burl Solomons uploaded a short 1969 clip of Bournemouth Beach between the piers to YouTube. The beach, the coastline as far as Hengistbury Head in the distance, Bournemouth Pier, the cliffs and the East Cliff Lift can all be seen.

Transfer To Devon In The 1970s

On 1 April 1974, Bournemouth was officially moved from the South East regional county of Hampshire to the South West county of Dorset.

First broadcast on 21st January 1974, this ThamesTv footage captured the beaches and parks packed with holiday makers and day trippers.

Bournemouth In The 1980s

Martin Bean uploaded a film shot by his dad Rod on an early home video camera in 1980.

It’s a drive through Bournemouth including Charminster, Boscombe & Southbourne.

Martin Edwards uploaded to YouTube home video footage of his family’s holiday to Bournemouth in 1994.

Back To Dorset page